Russia on Thursday denied that it had blocked UN Security Council condemnation of North Korea’s latest missile test and accused the United States of breaking off talks on a statement in an “abrupt manner.”

The proposed US-drafted statement seen by AFP would have demanded that North Korea “conduct no further nuclear tests” and halt missile launches after Pyongyang carried out a failed test on Sunday.

Russia wanted to include language contained in previous statements and resolutions stressing the need to achieve a peaceful solution “through dialogue.” 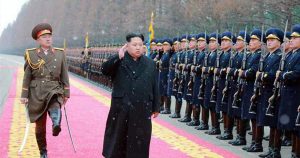 “We didn’t block the statement. We are requesting to use the agreed language,” Russian charge d’affaires Petr Iliichev said.

“We are ready to work on it and find a compromise, but the abrupt manner (with which) they stopped… I don’t know,” he told reporters.

Diplomats who spoke on condition of anonymity appeared surprised that Russia would block condemnation that China, Pyongyang’s ally, had been willing to support.

The row between Russia and the United States came ahead of a Security Council ministerial meeting next week on North Korea that will be chaired by US Secretary of States Rex Tillerson.