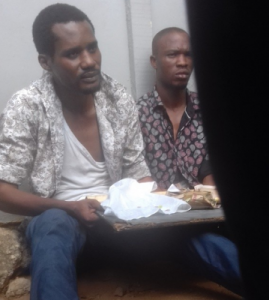 Seun Egbegbe has included the name of his younger brother,Lawal Kareem  alongside two others, Olalekan Yusuf, and Muyideen Shoyombo after they were implicated by Egbagbe, alleging that they took part in carrying out criminal activities with them.

Seun Egbegbe who was arrested with one Oyekan Ayomide in February for attempting to dupe Alhaji Isa Adamu pleaded not guilty to a 40-count charge when they were arraigned. They have since been held in prison custody as they were unable to perfect their bail condition.

Following the arrest of the three new suspect,  the State Criminal Investigation and Intelligence Department (SCIID) of the Lagos State Police Command on Monday presented an amended charge before Justice Oluremi Oguntoyinbo of the Federal High Court in Ikoyi, Lagos to enable the police to arraign the suspects arrested in connection with the criminal offenses levied against Olajide Oluwaseun Kareem, popularly known as Seun Egbegbe.
According to the amended charge sheet, the three were involved only in counts one and two, which accused them of conspiring to obtain the sum of N2,450,000 and 3,000 pounds sterling from one Alhaji Isa Adamu.
The offenses contravened the provisions of section 8 of the Advance Fee Fraud and Other Fraud Related Offences Act, 2006.
Kareem who spoke to reporters when he was paraded at the police command in Ikeja denied his involvement in his brother’s criminal acts, adding that Mr. Egbegbe only wanted to incriminate him.
He also said that Mr. Egbegbe sent him a text while in prison custody.
‘On the day Seun was arrested at Ikeja, it was my boss that told me that he saw the story on Facebook and went to Area F to see him,’ Mr. Kareem said.
‘But after then, he was charged to court and I didn’t go to see him, only for me to receive an SMS from him saying that he heard I was partying while he was languishing in prison,” he added.
However, Seun Egbegbe still has an outstanding iPhone theft case, which was adjourned to sometime in April 2017.
AdvertisementClick Here To Join The 10,000 Naira Giveaway For 100 People!