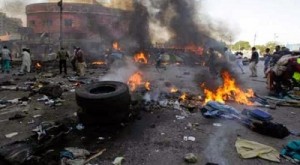 In a recent suicide bomb blast attack in Cameroon, in the early hours of Saturday, one person was confirmed dead and several others injured in the attack according to authorities in the country.

According to reports by Simonateba.com reports said that the attack took place in Kolofata, Cameroon’s far north region, close to the Nigerian border, said L’Oeil du Sahel newspaper. It was not clear whether the blast was carried out by a lone attacker or many.

L’Oeil du Sahel said that, “For now, one dead and many people injured,”

Since the inception of Boko Haram in the country,  about 2000 civilians, at least 150 soldiers and policemen and displacing hundreds of thousands of people in a war that does not seem to go away.