The suspended Director-General of the National Intelligence Agency, Ambassador Ayo Oke, appeared before the Osinbajo committee set up by President Muhammadu Buhari to investigate him and the suspended Secretary to the Government of the Federation, Babachir Lawal.

Oke is being investigated by the committee chaired by Vice-President Yemi Osinbajo over his claim that the money seized by the Economic and Financial Crimes Commission in a residential apartment at Osborne Towers, Ikoyi, Lagos belongs to the NIA.

He had earlier appeared before the committee on Wednesday shortly after his suspension was announced.

The Acting Chairman of the EFCC, Ibrahim Magu, had on Friday appeared before the same committee to give evidence on what his commission discovered about the money, the owners and their plan.

Oke’s appearance on Monday is believed to be aimed at giving him opportunity to answer some questions arising from Magu’s submission to the panel.

The committee that has the Attorney-General of the Federation, Abubakar Malami (SAN); and the National Security Adviser, Maj.-Gen. Babagana Munguno (retd.), as members is expected to turn in its report within two weeks. 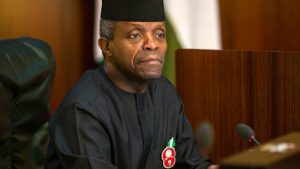