Despite the injection of dollars by the Central Bank of Nigeria into the foriegn exachange market, the value of the naira has dropped to 410 per dollar against the United States currency on Tuesday, down from 405/dollar recorded on Monday. 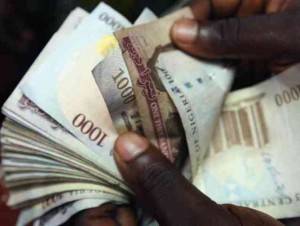 The CBN had on Monday auctioned $100m in forwards to be settled between one week and 30 days’ time, as against 60-day contracts it had written previously, shortening the settlement period on forward contracts to inject liquidity.

On the official market, the naira closed at 306.10/dollar on Tuesday.

The central bank had on Monday opened a special foreign exchange window for the Small and Medium Enterprises.

The window would enable them to import eligible finished and semi-finished items not exceeding $20,000 for an enterprise per quarter.

The Acting Director, Corporate Communications of the CBN, Mr. Isaac Okorafor, explained that the apex bank’s special intervention was necessitated by its findings that a large number of the SMEs were being crowded out of the forex space by large firms.