The National Emergency Management Authority has disclosed that five persons and eleven others were injured in three separate suicide attacks on Wednesday in Maiduguri. 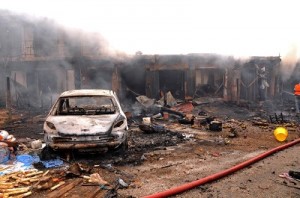 The agency in a statement by its spokesman in charge of the Northeast zonal office in Maiduguri, Abdulkadir Ibrahim said the event occurred at three different spots at the Muna area of the troubled town.

“The incidence occurred around 4:11 am which led to five deaths.

“Among the death persons include four suicide bombers and a Civilian JTF (vigilante). The injured persons were taken to General Hospital for proper medication while the death bodies were deposited at the mortuary by NEMA and SEMA emergency response officials.”