Three suspected Boko haram persons,took their own lives when they got killed from their own explosions in the early hours 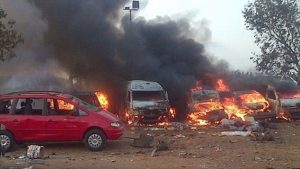 of Sunday when they attempted to invade Maiduguri, the Borno State capital, with explosive vests strapped around their bodies, an official

Two of the suicide bombers tried to make entry into the city through one of the known entry points near Muna Garage, a popular bus station along Maidugurui-Gamboru road.

They could not advance far into the town before some local security operatives spotted them. The bombers immediately detonated themselves to avoid being caught. No one but the two attackers died, an official said.

The spokesperson of the police in Borno State, Victor Isuku, said another lone suicide bomber, at the same time at a different location in the area, tried to attack civilians but was prevented by security operatives. The bomber ended up killing himself and injuring a civilian, he said.

“Also at Dusuma village in Jere LGA, a suicide bomber detonated IED strapped on him almost at the same time, killing himself, while one person was injured by the explosion.”

Boko Haram insurgents have sustained attacks using suicide bombers who attempt to sneak into the city through two locations: Muna Garage along Maiduguri-Gamboru road and Molai axis along the Maiduguri- Biu highway.

Dozens of such attacks have been carried out in the past six months, which have resulted in death and injuries and to dozens of people.

Some of the few arrested suicide bombers have told security officers that they were primed to carry out the attacks by Boko Haram leaders in remote bushes. They said the Boko Haram leaders dropped them on the outskirts of the town using motorcycles.

The factional Boko Haram leader, Abubakar Shekau, in a recent video said his faction of the group is responsible for the suicide bombings, an assault he boasted will continue for a long time.