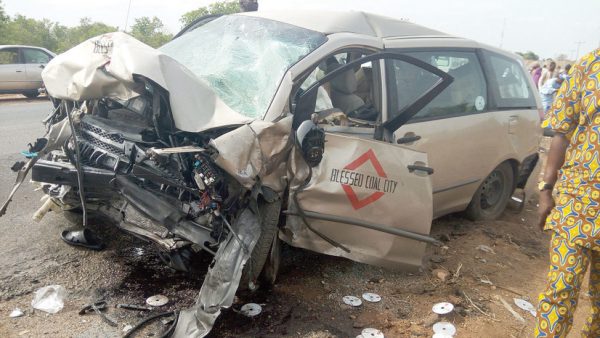 Worshippers of the First Evangelical Church of West Africa (ECWA) at the weekend could not hide the puzzle on their faces, which could only read one thing: “Why, God why?” Their faith appear to be failing them as their body language seem to give vent to the question on the minds of many, but which could not be expressed. In unison, they seem to wonder aloud why God would allow the death of their two beloved pastors to occur in one day.

Even when a minister mounted the rostrum with some soothing words of comfort, admonishing the congregation to bless God in all things, the Lord gives and he takes, faint hisses broke the serenity of the hitherto cold silence.

Their misery began on Friday, March 24, when their pastor, who had prayed against accident in an early morning prayer before embarking on the journey to renovate his house in his village where his late mother would be buried, met his death along with his assistant.

The journey ended for the duo as they lost their lives in an accident on their way to Mopa in Mopa Moro local council of Kogi State. Both pastors, described as inseparable in life, were also inseparable even in death. They had set out on the fateful day without any premonition of what was ahead. Sadly, it turned out to be their last journey on earth.

Revd. Elijah Jonigbosaye was until his death the head pastor of the First Evangelical Church of West Africa, Lokoja. He was assisted by Pastor Sunday Obadofin. Jonigbonsaye was preparing for the burial of his late mother scheduled for April 20. He was travelling home with two workers to renovate his house ahead of the burial. According to the Church Secretary, Obadofin decided to seize the opportunity of the trip to check on his family at Mopa.

About 20km from Lokoja, at Itakpe Irepeni, along Okene-Lokoja road, the car they were traveling in had a burst tire and their Mitsubishi Lancer rammed into a motorcyclist from where their car veered off to have a head-on collision with an oncoming Toyota Siena bus.

The four occupants of the Mitsubishi Lancer all died on the spot as the car was damaged beyond repairs. The two workers traveling with the pastors were immediately buried same day according to Islamic rite, while the 52-year-old Jonigbonsaye and 36-year-old Obadofin were laid to rest on Friday, March 31.

In another development, the Catholic Church yesterday confirmed the death of Rev. Sister Christiana Umeadi, Health Coordinator, in an auto crash.In a statement signed by the Director of Communications, Catholic Secretariat of Nigeria (CSN), Reverend Father Christian Anyanwu, Umeadi, until her death, was a member of the Sokoto Diocese.

Anyanwu said Umeadi, who was returning to her station after participating in mass cerebrospinal meningitis immunisation, was involved in an auto crash at Bakura, in Zamfara State.

He said the medical team had covered several parts of Sokoto diocese for the immunisation in the last one month and as the outbreak got worse, the team intensified their efforts. The states they covered, he said, include: Sokoto, Katsina, Zamfara and Kebbi.

Anyanwu explained that Umeadi led her team to Zamfara State for the immunisation exercise in March, where they were billed to spend just a day in Gusau town.Anyanwu noted that her remains had since been deposited in the morgue at the Usmanu DanFodio Teaching Hospital (UDUTH) Sokoto, adding that her immediate family, the Dominican Congregation, the Diocese of Sokoto and all her patients were left in utter shock and disbelief.

“We all resign to the will of God and trusting that our Sister will rise again at the resurrection,’’ he said.Until her death, Umeadi was the Assistant Prioress General of the Dominican Sisters of St. Catherine of Siena, Gusau, and Zamfara State. The church is yet to announce a date for her burial.