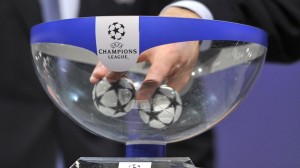 The Semi Final draw for the UEFA Champions league have been announced by the governing body, as there won’t be all Spanish final in this year’s UEFA Champions League as Real Madrid were drawn against city rivals, Atletico Madrid on Friday.

Real Madrid overcame Bayern Munich in the quarter final while Atletico dumped out Leicester City to make the last four.

In the other semi-final pairing, Juventus who sent Barcelona packing will be up against free-scoring Monaco.

The first leg games will be played on May 2.