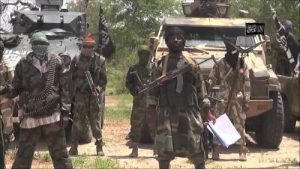 In unanimously adopting the resolution 2349 (2017), on Friday, the Council expressed concern about the protection of civilians affected by terrorism.

The Council strongly condemned all terrorist attacks, violations of international humanitarian law and human rights abuses by Boko Haram and Islamic State in Iraq and the Levant (ISIL) in the region.

The UN body also condemned killings, abductions, child, early and forced marriages, rape, sexual slavery and the increasing use of girls as suicide bombers by the Boko Haram terrorists.

“Those responsible must be held to account and brought to justice,” the Council declared.

The Council encouraged governments to enhance regional military cooperation, and to move “vigorously and decisively” to cut funding flows to individuals, groups, undertakings and entities on the ISIL and Al-Qaida Sanctions List, which includes Boko Haram.

It urged Lake Chad Basin Governments to implement consistent policies to promote defections from Boko Haram and ISIL, to deradicalize and reintegrate those who had already defected and to ensure there was no impunity for those responsible for terrorist attacks.

On the humanitarian front, the Council urged all parties to the conflict to ensure respect for and protection of humanitarian personnel, and to facilitate safe, timely and unhindered access for humanitarian organisations to deliver aid.

In the ensuing discussion, delegates welcomed the Council’s unity in passing the resolution on the heels of its mission to Nigeria, Cameroon, Chad and Niger from March 2 to 7, to better understand the conflict’s root causes.

Several members urged the quick disbursement of funds pledged at the Oslo Humanitarian Conference on Nigeria and the Lake Chad Region held on Feb. 24.

Cameroon’s ambassador to the UN Tommo Monthe, speaking on behalf of the Lake Chad Basin Commission, described the resolution as a “step change in mobilising international support for countries to combat Boko Haram”.

Monthe said that the military response, while essential, should be part of a holistic approach.

He urged states to adopt and implement measures to tackle the causes and consequences of the current situation.

Monthe expressed hope that the resolution would mark the start of more decisive support to the affected countries, who had been forced to curtail spending on education, health and other efforts.

In a similar vein, Nigeria’s representative, Anthony Bosah, welcomed the resolution’s call for enhanced regional military cooperation and coordination, emphasising that Nigeria was resolute in its efforts to defeat terrorism.

Bosah said people of the Lake Chad Basin needed support, pointing out that shrinking of Lake Chad had exacerbated their hardship, with cross-border knock-on effects making it difficult for governments to meet the people’s needs.

The Permanent Representative of the United Kingdom and UN Security Council’s President for the month of March, Mathew Rycroft, said the fact-finding mission to the region was an eye-opener.

“We will fail the people of the region if we do not respond to what we saw,” Rycroft said.