Chelsea Football Club sealed Champions League spot for next season after a convincing 3-1 win away at Bournemouth.

The game saw Nigeria’s Victor Moses back into action for the blues, he saw yellow-card 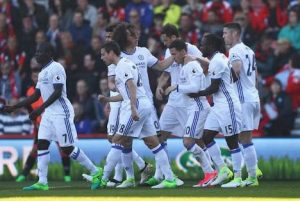 as early as the 8th minute but he kept his cool to avoid a second that would have resulted in a red card.

With the outcome from Saturday’s game, Chelsea have kept their seven points lead at the top of the Premier League.

The Blues now have 75 points and no team outside the top four now can catch up with Chelsea with seven games left to go.

It wasn’t a stroll in the park for Chelsea as the Cherries put in a spirited performance and gave themselves a lifeline on the stroke of half time when Joshua King found the net with the help of a deflection, but Marcos Alonso’s impressive free kick in the second period put the game beyond them.

In other games, Kelechi Iheanacho was a second half substitute as Manchester City kept their own top four finish ambition intact with a 3-1 win over Hull City.

On their part Liverpool came from behind to beat Stoke City by 2-1 while West Ham were able to secure a crucial lone gone win over Swansea City.