Former Nigeria national team goalkeeper and captain, Vincent Enyeama, has been sadly ruled out for the remainder of the season due to a knee injury.

The development means Enyeama is no longer available for selection by his French club, Lille Metropole

The former Enyimba shot stopper had hitherto been linked with a return to international football following injury to Carl Ikeme who succeeded him as Super Eagles first choice.

But the injury has put paid to that ambition as he won’t recover in time to be part of Nigeria’s African Cup of Nations qualifier against South Africa in June.

Before Lille’s confirmation of the injury to Enyeama, the former Hapoel Tel Aviv star refused to confirm or deny whether he will be staging a comeback to the national team after calling it quit in controversial circumstance in 2015

Lille posted the unfortunate news on their official twitter handle on Thursday.

“Vincent Enyeama will be out for the rest of the season. #CourageVincent,” Lille tweeted on Thursday.

The 34-year-old has featured 34 times in all competitions for the Ligue 1 side this season. 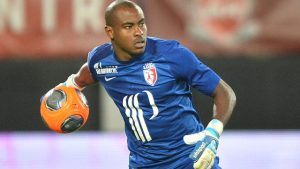