Prof. Wole Soyinka, has urged President Muhammadu Buhari to disclose his state of health to Nigerians, stating that the President is a public property. 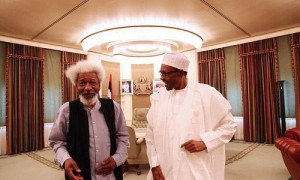 This was made known by the professor, at a forum in Lagos on Friday, themed, ‘Sacred Cow’, described the speculations surrounding the President’s true state of health as avoidable.

The Nobel laureate saidBuhari’s failure to publicly disclose his state of health had increased political manipulations in the country.

Buhari was on Wednesday absent from the Federal Executive Council meeting and the Juma’at service at the mosque in the Presidential Villa on Friday.

Soyinka said, “Why is the President hiding his state of health? He’s supposed to understand he’s public property; me, I’m still private property, that’s why I’m not in Aso Rock (Presidential Villa).

“Once you are in Aso Rock, or you occupy a similar position, you have a responsibility to come out frankly to your citizens.

“Let him address the nation and stop all these speculations which create unnecessary political manipulations among other things.”

The renowned playwright also raised the alarm that his Abeokuta country home, Ogun State, had been invaded by herdsmen a second time and that the matter had been reported to the police and the Alake of Egbaland, Oba Gbadebo Adedotun.

Soyinka had in April 2016 announced that his residence was invaded while he was abroad.

He accused the herdsmen of invading his sanctuary and ecological preserve, describing the action as being done with impunity.

He said, “I don’t believe in conspiracy theory but the incidences that have taken place in the sanctuary are very alarming. The police have the records.

“They do not have respect for human life; they used human beings for suicidal bombing, why should they not use cows as suicide bombers? …I see no other interpretation to all of this than a movement to enslave the citizens of the country and show that they are masters of the land.

“They are camping not as peaceful neighbours but as conqueror. One has the right to assume that any cow that comes right to one’s doorstep is a suicidal bomber.”

Faulting the capacity of security agencies to deal with the problem, Soyinka said citizens have had to defend themselves.

“Herdsmen are worse than Boko Haram. Some kind of action is required; maybe declare a day of beef boycott to compel the leadership to take holistic action,” he concluded.