A businesswoman, Mrs. Afolasade Agbolahan, has called on the Lagos State Police Command to investigate and bring the killers of her son, Abdulazeez to book. 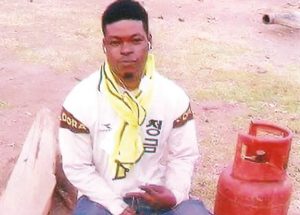 She lamented that the police had given up on the case, adding that her son’s killers, who were known to the police, were walking free.


Reports gathered that the 25-year-old was celebrating his birthday on February 3, 2017, with some friends at the Kuramo Beach on the Lagos Island area of Lagos State, when a gang of hoodlums stormed the venue.

They were said to have abducted the victim, while everyone fled the scene.

Our correspondent gathered that the friends, who reported the case to the police at the Akodo division, were detained.

About three days after the incident, the mutilated corpse of the victim was said to have been recovered at the beach.

His mother said he was hacked with a cutlass, while all his joints were broken.

She said, “My son was a welder with a construction company and he lived in Magbon for over two years.  On Friday, February 3, he received a call from some of his colleagues at work to come down to the Kuramo Beach where they planned to mark his birthday. He celebrated his 25th birthday on January 31.

“Around evening, while the celebration was on, some cult members attacked the party and abducted my son. I was informed the following day.

“We raised a search party for him. His residence was just a stone’s throw to the beach, so his landlady also involved some fishermen and local divers to join in the search. All our efforts were futile.

“On the third day, around 3pm, we saw his corpse at the shore of the river. From the marks on his body, I discovered that they tortured him to death and broke his hands and legs. They cut different parts of his body with a cutlass.

“His friends, who had earlier reported the case to the police at the Akodo divison, were arrested. But after police investigation absolved them of complicity, they were released.”

She added that the Investigating Police Officer later identified the prime suspects as one Ibela and Kolewu.

The two men were said to be at large and police efforts at apprehending them had been futile.

Abdulazeez’s mother explained that she approached the traditional ruler of the community to assist in the arrest of the suspects, but she was told that the men were intractable.

Afolasade urged Nigerians to help in bringing the suspected cult members to book, adding that her son was killed for no just cause.

“My son must not die in vain. I plead with the Lagos State Government to go after the perpetrators of the crime, arrest and bring them to justice,” she added.

The Police Public Relations Officer, Olarinde Famous-Cole, confirmed the incident, adding that Abdulazeez was killed during a fight between rival cult groups in the community.

He said the police were making efforts at apprehending the suspects.

“We will not rest until we get those suspects. They are presently at large,” he said.