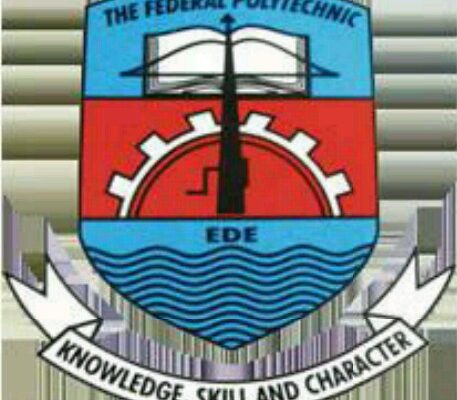 Armed policemen and operatives of the Nigeria Security and Civil Defence Corps were deployed  in the   Federal Polytechnic, Ede in Osun State on Monday to make sure the planned protest by members of the Senior Staff Association of Nigerian Polytechnics and the Non Academic Staff Union did not turn violent.
The workers had embarked on an indefinite  strike since March 6 to protest the  non implementation of the revised edition of 2013 scheme of service by the management of the institution.
But the plan  of the striking workers  of the institution to hold a meeting inside the campus was foiled as  the gates leading into the school were locked very early in the morning and security men were deployed there.
Not deterred by the development, the Chairman of the SSANIP, Mr. Johnson Adekanola and other union leaders still went ahead with the planned protest under the watch of the armed security operatives.
Adekanola said while other polytechnics in the South West had implemented the new service scheme, the management of the Federal Polytechnic Ede had refused.
The protesters said they would not succumb to the alleged victimisation by the management, saying they were ready to go on with the strike for as long as it took the management to address the issue.
However, the Acting Rector, Mr. Arthur Aja, said the school was locked because of insecurity.
He said there was no electricity supply and the management did not know, who removed the key to the generator. He said the management had appealed to the striking workers to resume work, but they refused.
He said the matter would soon be resolved, saying it was a family affair and it would be resolved as such.