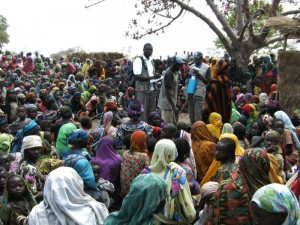 A total of 10,500 of the 79,000 Nigerian refugees forced to flee their homes in Borno State to Cameroon by Boko Haram insurgents about two years ago, have returned back home.

The Borno State Governor, Kashim Shettima, who announced their return in Maiduguri, the state capital, on Thursday, said the refugees were forced to return home by the Cameroonian government.

Over 100,000 residents of the communities located in the border areas were displaced forcing them to seek refuge in the neighboring Cameroon.

The United Nations High Commission on Refugees (UNHCR) had in March expressed concerns that the forced return of refugees from Cameroon “have continued unabated despite the existence of an accord that allows the facilitation of voluntary return of Nigerian refugees when conditions were conducive.”

Mr. Shettima, who spoke when the new Director General of the National emergency Management Agency (NEMA), paid him a courtesy call, expressed regret over the action of the Cameroonian authorities, saying they had dishonored an earlier agreement reached with Nigerian and the UNHCR on the management of refugees.

“The Cameroonian authorities have not been honorable in keeping the agreement signed with Nigeria and UNHCR on our people in their country,” said Mr. Shettima.

The governor said a total of 10, 500 returnee refugees had reached various locations around the border areas between the two countries in different batches.

The governor said his deputy, Usman Durkwa, had been deployed to lead a team of officials to Bama town where they would make available all the logistics needed for hosting the refugees.

The refugees, he said, would be camped in the town, which his administration is currently rebuilding after Boko Haram sacked its entire residents and burnt down over 2,000 houses.

Mr. Shettima said “the humanitarian challenges in the state was very huge and overwhelming but we are was determined to overcome them.”