Deolu
Nigerians are currently being deported from other countries in droves due to a range of several immigration offences. 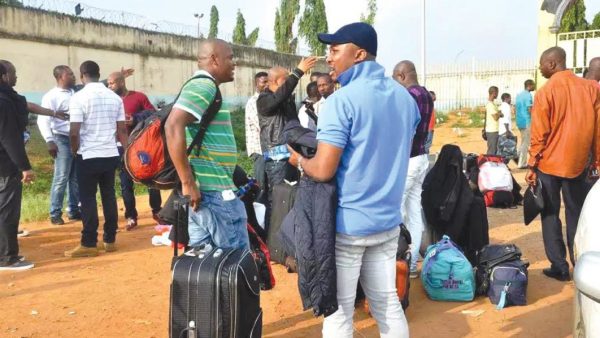 No fewer than 1,134 Nigerians have been deported from various countries for various immigration offences in three months, according to a statistics released by the National Agency for the Prohibition of Trafficking in Persons and other related offences.
The statistics covered February to April, 2017. The agency said the offences included human trafficking, smuggling of migrants and non-possession of valid travel documents.
A correspondent learnt that from the 1,134 deportees, 905 were deported from Libya in five batches, while 115 came from Italy in four batches. From Mali, 41 persons were brought into Nigeria while 26 came from Burkina Faso.
Ghana deported 14 Nigerians; the United Arab Emirates, 22; one from Cameroon; eight from Ivory Coast and two from Togo.
The Director-General of NAPTIP, Julie Okah-Donli, who released these figures during a management meeting of the agency, stated that the statistics was alarming and embarrassing.
She added that more Nigerian victims of human trafficking were stranded across African countries, awaiting assistance.