Two men in Indonesia’s Aceh province were publicly caned dozens of times Tuesday for consensual gay sex, a punishment that intensifies an anti-gay backlash in the world’s most populous Muslim country and which rights advocates denounced as “medieval torture.”

More than a thousand people packed the courtyard of a mosque to witness the caning, which was the first time that Aceh, the only province in Indonesia to practice Shariah law, has caned people for homosexuality. 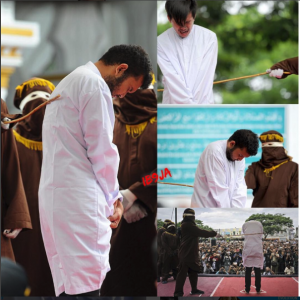 The crowd shouted insults and cheered as the men, aged 20 and 23, were whipped across the back and winced with pain. Many in the crush of spectators filmed the caning with cellphones as a team of five robed and hooded enforcers took turns to inflict the punishment.

Sarojini Mutia Irfan, a female university student who witnessed the caning, said it was a necessary deterrent. “What they have done is like a virus that can harm people’s morale,” she said. .

“This kind of public punishment is an attempt to stop the spread of the virus to other communities in Aceh.” The couple were arrested in March after neighborhood vigilantes in the provincial capital, Banda Aceh, suspected them of being gay and broke into their rented room to catch them having sex.