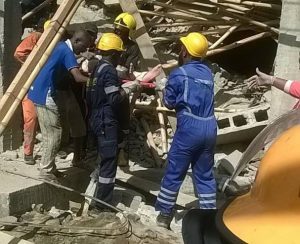 The  Lagos State Emergency Management Agency, LASEMA have confirmed the death of three people in the collapsed three-storey building at Ilasa area of Lagos, Southwest Nigeria on Thursday while 19 others rescued.

According to information  gathered that rescue operation continued on Friday as it is believed that some people might still be trapped under the rubble.

He said 19 people had so far been rescued by LASEMA and other rescue agencies.

The building was under construction when it collapsed on Thursday around 2:30pm.