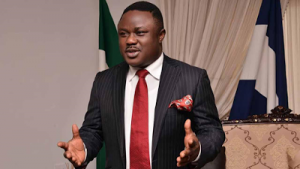 Governor Ben Ayade of Cross River has granted a state pardon and freed up to 34 prisoners serving various jail terms at the Calabar prison to mark the 50th anniversary of the state.
Ayade in his anniversary speech on Saturday in Calabar said that the pardon was in the spirit of the celebration and based on the provision of section 212 of the 1999 Constitution.
He said, “In the spirit of the celebration and the powers vested on me by the 1999 Nigerian Constitution, I hereby grant clemency to the following category of people serving various jail terms in the state.

“They are five people on death row; 16 prisoners serving life sentences; four prisoners who are above 60 years of age; nine convicted criminals who are terminally ill and may likely die any moment if not granted pardon.’’

Prodding further, the governor stressed the need for the people to always remember past leaders of the state who had made considerable efforts in moving the state to greater heights.
He said that in spite of the great challenges that have bedeviled the state, there was the need for the people to have hope for a greater future.
According to him, the state has excelled in many fields of endeavors including tourism, agriculture, and forest preservation, adding that the annual Calabar Carnival has become the greatest street party in Africa.

“I, therefore, call on you to stick together as we look forward to a greater tomorrow, ‘’ he said.

As part of the celebration, Ayade had earlier signed into law eight bills passed by the State House of Assembly.
The laws include Administration of Criminal Justice in Cross River; Citizen Right, Cross River Inland Water-ways, Cross River Scrap Regulatory Agency, Cross River Lottery; Hawkers Right; Emergency Management Agency, and House of Assembly Commission.
The governor also called on the people of the state to pray for the quick recovery of President Muhammad Buhari.
Source: (Vanguard )