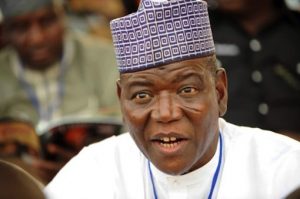 Former governor of Jigawa state, Sule Lamido, has been remanded  in prison custody by a Jigawa State Magistrate Court.

Mr. Lamido is to be in the Dutse prison until May 4 when applications for his bail will be decided, Chief Magistrate Usman Lamin ruled.

The magistrate said he needed time to decide on the application for bail and another on the police’s First Investigation Report, FIR, brought as evidence in the case.

Mr. Lamido is being prosecuted by Ikenna Ekpunobi who obtained a fiat by the Jigawa State Attorney General and Commissioner for Justice, Sani Gabbas.

After the court ruling and despite the heavy presence of security operatives at the court and around Dutse, protest by the former governor’s supporters outside the court forced the police to use tear gas to disperse the crowd.

Mr. Lamido was arrested on Sunday in Kano and his houses in Kano and Jigawa searched. He was brought to Jigawa on Tuesday morning.