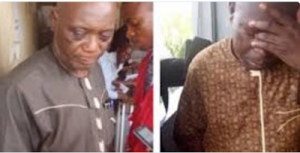 An official of the Independent National Electoral Commission (INEC), Yisa Olarenwaju has been sentenced by the   Federal High Court sitting in Lagos, on Wednesday  charged with obtaining proceeds of unlawful act.
They were brought to court on a six-count charge of money laundering to the tune of N500 million, which they pleaded not guilty but the second defendant later changed his plea to guilty.
Olarenwaju, thereafter, entered into a plea bargain agreement with the EFCC on May 2.  At the resumed hearing, Justice Mohammed Idris convicted and sentenced the INEC official.
According to the Judge who presided over the case, Justice Mohammed Idris, the INEC official  was sentenced based on a plea bargain agreement he reached with the Economic and Financial Crimes Commission (EFCC). The court adopted the plea bargain agreement as the judgment of the court.  The plea bargain agreement stated that;

“He shall within seven days after the payment of the fine imposed by the court, enter into a bond with the EFCC, never to be involved in economic and financial crimes within and outside the shores of Nigeria”.