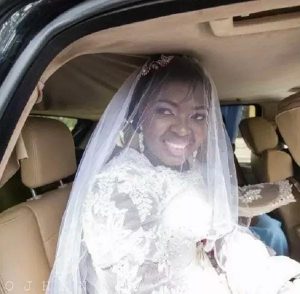 Marriage is a beautiful thing but reverse was the case of a young man who recently became a husband and became a widower following his wife’s death 38 days after their wedding. Often times, young people dream of growing up, getting married and starting their own family, after years of watching other people express love for their spouses.
One young man’s dreams has been shattered as his new wife died 38 days after they said ‘I do’ to spending forever together. The man identified as Ajayi Oluwatosin, married his beautiful bride, Suzzy, in March 2017, only to lose her a few weeks later.
Even though the cause of her death was not revealed in their posts, the couple’s friends have since taken to their timelines to console the sad groom. One of them identified as Chichi Janet Bernard, wrote: “Oh my Suzzy Yakubu my friend we celebrated your wedding 38 days ago and now death shows its ugly face and took you away. Rest in perfect peace my friend till we meet again.”
Christian Kehinde Ajayi wrote: “Condolences Jide, my heart is with you, may God comfort you at this trying time.” Bolaji Osakuade Tosin wrote: “You just have to be strong, God will relieve this stress, we are all devastated but we rest our hope in the only creator of the universe, Pele aburo mi.”
Source : ( gossip.naij)