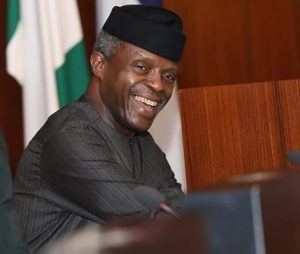 Acting President,Prof. Yemi Osinbajo has received full backing from the United States of America and the United Kingdom in the ability and commitment to continue with the anti-corruption war and economic revival in Nigeria.

The two countries said on Friday that they have confidence in Osinbajo to carry on with the quality leadership President Muhammadu Buhari has been providing the country.

This is coming on the heels of public outrage and fears expressed by Nigerians over Buhari’s deteriorating health and continued absence from public.

The President left for the UK last Sunday to receive medical attention and he is expected to be there for an indefinite time, according to his media aide, Femi Adesina.

In his last medical trip to Britain, Buhari was away for 49 days.

In the last few weeks, some prominent Nigerians had expressed angst over a cabal that has purpotedly hijacked power in the Presidency due to Buhari’s protracted illness, leaving Osinbajo in the cold.

The US and the UK, however, said that they believe the VP would take off from where the President stopped when he jetted out of the country to the UK for further medical attention.

When asked by our correspondent if the US Government was worried that Buhari’s poor health could slow down ongoing anti-corruption war in Nigeria, the spokesman for the US Embassy in Nigeria, Russell Brooks, said President Donald Trump’s administration believed in Buhari and Osinbajo.

Brooks said, “We are very much in favour of President (Muhammadu) Buhari’s campaign against corruption. We also believe that Acting President (Yemi) Osinbajo is strongly committed to this agenda and will continue to pursue it while President Buhari is out of the country.”

Speaking in a similar vein, the spokesman for the UK High Commission in Nigeria, Joseph Abuku, stated that while the British Government could not comment on whether any crisis resulting from Buhari’s protracted ill-health would lead Nigeria into political instability, he said the UK had confidence in the President and his deputy.

“Again, we wish President Buhari good health and a speedy return to his homeland,” he said.

Recently, the US had praised the Buhari administration’s current agenda of fighting insecurity and corruption, noting that it agrees with Trump’s plan of dealing with such issues on the African continent.

Speaking last week during a special briefing in Washington, the Deputy Director, Office of West African Affairs, Bureau of African Affairs, Nathan Holt, told journalists that the country was a critical US partner.

“Nigeria matters to us because it’s Africa’s most populous country, and depending on the price of oil, it’s either the biggest or the second biggest economy on the continent.

“With a current population of 182 million, Nigeria is projected to grow to over 400 million over the next few decades, which will leave it by the middle of this century as the fourth-largest country in the world,” Holt said.

When asked about America’s continued support for the country in view of President Donald Trump’s rhetoric to cut foreign aids to Nigeria and other African countries, Holt said, “I’m not the person who can answer your questions about the future of the US Government budget.”