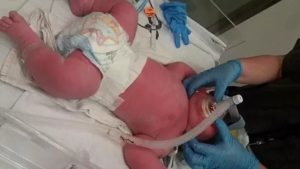 The wonders of the lord is always surprise to man eyes, there was another miracle inNew Zealand mother has given birth to one of the biggest babies her country has ever seen. The baby boy reportedly weighed a whooping 7.39kg and measures 57cm from head to toe. He was born via cesarian section on Monday, May 8 at Wellington Hospital and is reported to be healthy.
The newborn baby boy’s parents did not wish to be identified. However, they said their first born son was also big and weighed 5.4kg at birth. The also said they were shocked at the size of their baby, adding that they are both normal sized and are not tall.
The father said: “We are not that tall ourselves, so we are not sure where his size comes from.” Some online commentators have already called their baby the next Jonah Lomu, the legendary New Zealand rugby player. However, the parents are having none of it: “But we think he’ll be a concert pianist.”
In January, another mother in Melbourne, Australia, gave birth to another big baby weighing 6.06kg. However, the biggest ever newborn baby was born to a Canadian mother named Anna Bates, whose baby boy weighed 10.4kg.
Source: ( goosip.naij.com)