The Nigeria Security and Civil Defence Corps, Lagos State Command, said it had arrested 120  suspected pipelines vandals in the state between January and May 2017. 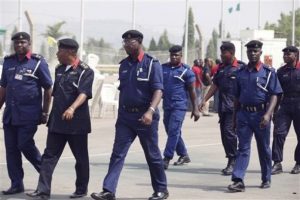 The State Commandant, Mr Tajundeen Balogun, made this disclosure on Monday, in Lagos, while receiving the Head of Lagos Editorial, News Agency of Nigeria, Mr Mike Mbonye, who paid him a visit.

Balogun said that the suspects were arrested in different parts of the state, particularly in Ikorodu and Badagry, noting that the suspects had been sabotaging the nation’s economy.“Ikorodu axis has been very challenging for us due to the type of terrain. So sad, that almost all security agencies have lost their men in Ikorodu; we have equally lost five men in the area.

“We have, however, secured the conviction of three persons for three years jail term. We ensure that there are empirical evidence before we embark on prosecution.

“The command is re-strategising with a view to improving on the successes we have recorded within the last five months. NSCDC has done well in Lagos State and we are still doing more.

“We have credibility and integrity as to the information members of the public gives us on trust. The intelligence networks of sister agencies also help.

“As at now, we have 159 armed personnel, manning power stations in Lagos to prevent vandalism. We do stop and search and monitoring the movement of fuel tankers in the state,’’ he said.