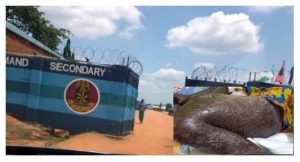 Wrong medications could have taken the life of a 13-year-old student of Command Secondary School, Suleja, Abuja  who escaped death after being treated at the school clinic. The student had gone to the clinic because he had high body temperature but after the medication was administered on him the student began to develop rashes. It was learnt that the student’s eyes turned red and his lips were swollen.
NAIJ.com gathered that the student’s reaction to the medicine worsened after the same nurse left him at the clinic for three days without administering any medication to help his condition.
According to reports, by the time the school management called the parents of the poor student the condition had already reached a fatal stage. The student was immediately rushed to the Kubwa General Hospital in Abuja. On getting to the hospital the doctors revealed that the student was reacting to sulfur but the school had told the parents that the student was given Augmentin and Paracetamol.
Medical experts at the National Agency for Foods Drug Administration and Control expressed that the reaction might not have gotten to a fatal stage if the school had taken the boy’s condition seriously. According to SaharaReporters, the school management has refused to speak on the tragic incident until the parents of the young boy established a case against the management.
However, Colonel B.S.Omoge, the school’s matron, revealed that the boy was given Fansidar and Paracetamol. Omoge also disclosed that the school’s commandant was given a notification after the boy developed the reaction. The boy’s parents have asked for justice against the school’s management that neglected to do the proper thing for their child who was in pain for three days.
According to SaharaReporters, the 13-year-old suffered a medical condition called Stevens-Johnson Syndrome (SJS). SJS is a rare condition that causes the skin to peel off. It happens when someone has a severe reaction to taking certain drug use.
AdvertisementClick Here To Join The 10,000 Naira Giveaway For 100 People!