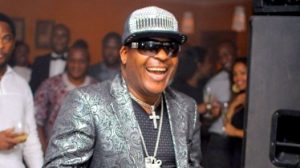 A renowned Juju artist, Shina Peters, has blasted the federal government saying enough appreciation is not shown to the Nigerian entertainment industry especially veterans like him.

The Afro Juju creator bared his mind in a chat with PREMIUM TIMES at the official commissioning of the Copyright Society of Nigeria house on Sunday, in Lagos.

He said, “I will like to thank God for his grace for people like us to witness this occasion despite the federal government’s refusal to acknowledge veteran Nigerian musicians. Rather than recognise us, they are busy pumping millions of dollars into football.

“We have been saying this for so long that if you can carve a body for football, why can’t you do the same thing for entertainment. Nigeria is a recession now; we the artistes are fending for ourselves with the proceeds from our music. However, these funds are hardly enough because of piracy and other issues.”

The 58-year–old singer, who started his career as a guitarist with General Prince Adekunle, one of the pioneers of Juju music, also revealed that he has been able to keep body and soul together with the quarterly payment of his royalties from COSON.

He said, “I have four platinum evergreen albums and that is supposed to keep me and my family going. I am not even supposed to even sing again but live on royalties from my music. Thankfully COSON has been paying us what we really earn and deserve quarterly.

“I will love to implore Nigerian artistes who are yet to join COSON to do so as they can because they don’t know what they are missing out big time. How can we be working all our lives as a musician without having something to show for it.’’

Although he turns 59 in a week’s time, the spritely singer displayed no signs of slowing down just yet. He said he would continue to defy his age because he is a born musician.

“I may be getting old by age but I am still young at heart. As the originator of Afro Juju, which comprises high tempo music with rigorous dancing steps, I will continue to dance to my music my age notwithstanding. My age has nothing to do with the way I dance, it is inborn and I can never stop doing it,” he said.

SSP, as he is fondly called, released his debut album as a solo musician, Ace (Afro-Juju Series 1), in 1989. The album went double platinum and was the career breakthrough that made him a household name in the Nigerian music industry.

‘Shinamania’ produced by Laolu Akins was released in 1991, winning three awards at once with a Platinum Disc for selling more than 250,000 copies.

SSP currently has 16 album releases to his credit.

He is the father of renowned music video director, Clarence Peters – a product of his affair with Nollywood actress, Clarion Chukwura.

He is married to Sammie Peters.