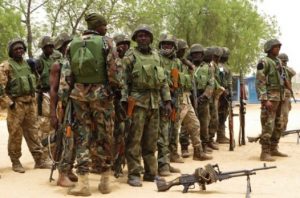 Troops of 6 Division, Nigerian Army, in the early hours of Tuesday shot dead a notorious cultist during a gun battle in Sime community, Tai Local Government Area of Rivers.

Aminu Iliyasu, a colonel, the division’s deputy director of Army Public Relations, made the disclosure in a statement issued to newsmen on Tuesday in Port Harcourt.

He said the deceased cultist was the leader of Dey Bam secret cult group fingered in extra judicial killings.

He added that the late cultist was on the wanted list of Rivers Police command.

Mr. Iliyasu said one suspected cultist was arrested while several others fled the scene with gunshot wounds in the operation that lasted several hours.

“During the operation, the troops engaged in gun duel with members of the notorious Dey Bam cult group led by one Mr Supreme, who has been on the wanted list of Rivers government.

“Supreme was shot during the gun battle and later died as a result of excessive bleeding while several others (suspected cultists) escaped with gunshot wounds.

“One SIGP228 pistol with registration number 299MME225 and ten rounds of 9mm ammunition were recovered during the raid,” he said.

Mr. Iliyasu said one suspected cultist was arrested and handed over to Rivers Police command for further investigation.

The spokesman said the raid was part of the army’s clampdown on persons and groups involved in criminality in the state and its environs.

According to him, the division has already deployed troops to strategic locations to safeguard lives and properties of residents of the state.

“Cultists and other criminal elements are hereby warned to desist from wicked acts and embrace the amnesty programme currently being offered by Rivers government.

“The division urges the residents to assist it with credible information that will lead to the arrest of criminals in their domain,” he pleaded.