KAS Eupen striker Henry Onyekuru is been scouted by Arsenal FC according to Sky sources.

The 19-year-old is the top scorer in the Belgium domestic league, notching his 20th goal on May 20, and has been in demand with SSN HQ 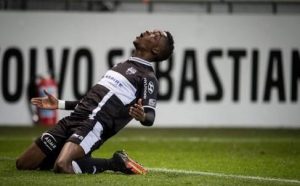 The forward’s representatives have already told Sky Sports News HQ he wants to play in England and talks with two unnamed clubs were understood to be progressing recently.

Sources close to the player said they were confident the forward would play in the Premier League next season.

It seems the Gunners are now in the driving seat to acquire the services of the Nigerian forward.

Onyekuru, who has a £6.8m release clause in his contract, has already turned down moves to Belgian giants Brugge and Anderlecht.

Celtic are also understood to have come close to signing him in January but Eupen refused to sell him during the winter transfer window.

Onyekuru made his debut for Eupen in 2015 as a 17-year-old and helped the club achieve promotion to the Belgian top flight in his debut season.