The Federal Road Safety Corps said on Tuesday that the call by Governor Akinwunmi Ambode of Lagos State for its personnel to restrict their activities to city suburbs and the highways had negative implications.

An Asst. Corps Marshal and Zonal Commanding Officer (Zone 2), of the corps in Lagos and Ogun States, Mr Shehu Zaki, said, “The implication is that even some members of the public who do not know how we operate have started telling some of our officers to leave the roads, in line with the governor’s call.

“There are certainly some negative implications to this statement, coming from a state governor and we are mindful of that.

“The governor himself has come out categorically to say that the FRSC should leave the roads.

“It did not come as a surprise because it was our own concept; we felt that such a policy will help us to serve the people better,’’ he said.

The FRSC boss noted that officials of the corps had the right to operate both on the highways and within the cities, in emergency situations.

Zaki said that emergencies could occur anywhere that would require the services of FRSC personnel, saying that its personnel would not leave the roads totally as it had the right to work in the metropolis, in particular circumstances.

“The governor cannot force us out of the roads, but he can advise us, as he has already done.

“That policy of the Lagos state government is even going to help us more and allow us to effectively deliver on our mandate on the highways, even more than before.

“Safety is something that has always been at the heart of FRSC operations and we are doing effectively both within the cities and on the highways,’’ he said.

Ambode had recently asked the FRSC to limit its activities to only the suburbs of cities and the highways.

The governor made the call during the commissioning of Pedestrian Bridges, Laybys and Slip Roads at Ojodu-Berger on May 16.

He said the decision was to ensure a free flow of traffic in the state, noting that the activities of the FRSC contributed to traffic congestion on inner city roads. 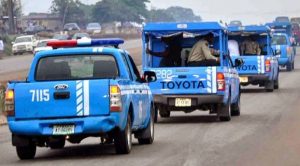