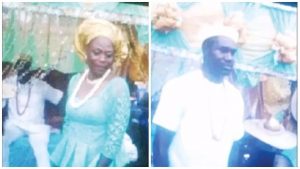 A newly wedded couple were set ablaze by the wife herself after she allegedly accused her husband of infidelity before she set herself and her husband on fire – Her husband who did not die on the spot was immediately rushed to the hospital where he later died.
The tragic incident happened on Tuesday, May 30, around 12:00am in Middle Road residence, Sabon Gari area of Kano state. It was gathered that the woman allegedly accused her husband of infidelity after she overheard a phone conversation between her husband and an unidentified lady.
According to The Punch, the woman who was furious with her husband reportedly set fire on a keg of petrol that immediately exploded and burnt their home. It was reported that the woman who was burnt beyond recognition died on the spot while her husband was immediately rushed to a nearby hospital where he later died after suffering severe burns.
An eyewitness, Emmanuel Okorie, explained that the woman who had been pregnant got married to her husband five weeks ago.
According to Okorie, the husband who he simply identified as, Emeka, revealed to him that his wife was forced on him by his mother. However, Okorie could not confirm if it was the alleged phone conversation that led to the tragic incident.
The Kano state police spokesperson, Musa Magaji Majiya, disclosed that the police command has launched an investigation into the cause of the incident.