Manchester City quest to finish in the top four continues as the Citizens thrash Crystal Palace 5-0. David Silva celebrated his return to the team as he got the first goal for Manchester City 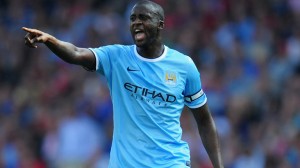 at the Etihad Stadium on Saturday.

Silva, out for a fortnight after suffering a blow to his knee during the FA Cup semi-final defeat by Arsenal, struck inside the first two minutes.

Only the top four at the end of the season qualify for the Champions League, European club football’s leading competition, with City now having three Premier League games left to play this term.

But both Liverpool (at home to Southampton) and United (away to Arsenal) are in action Sunday.

For Palace, noy yet safe from the threat of relegation, Saturday’s reverse was their third straight defeat.

City manager Pep Guardiola has spoken repeatedly over the last two months about his side’s failure to make possession and chances count, citing that as a reason for their relatively disappointing season.

He would have been pleased that his side scored from their first attack, but not that they then passed up a series of first-half opportunities to add to that lead.

The goal, City’s fastest in any game this season, was well-worked, with Spanish playmaker Silva starting and finishing the move.

Silva, making his 200th Premier League start, angled a chip towards Sterling and then, when the cross was half-cleared by Martin Kelly, timed his run perfectly to side-foot a volley into the corner of the net.

For much of the opening half-an-hour, it seemed inevitable that more goals would follow, as Palace offered little midfield resistance.

But a combination of poor final passes and sound goalkeeping from Palace’s Wayne Hennessey prevented City from increasing their tally for a while.