Civil Society Network Against Corruption, CSNAC, has urged the Inspector General of Police, to immediately prosecute the management of Reigners’ Bible Church, Akwa Ibom, over the death of 26 worshippers following the collapse of the church building on December 10, 2016.

In a petition signed by the national chairman of the organisation, Olanrewaju Suraju, CSNAC said it is petitioning the IGP based on the instruction of the office of the Director of Public Prosecutions of the Federation on the matter.

“We write to you on the above subject matter on the direction of the office of the Director of Public Prosecutions of the Federation.

“Sometime on the 16th January, 2017 we wrote a petition to the Ministry of Justice and Office of the Director of Public Prosecution with respect to the above subject following the flagrant display of nonchalance, high handedness, impunity and negligence by the management of the Reigners Bible Church leading to the death of more than 25 innocent Nigerians during a collapse of the church’s building on the 10th December, 2016.

“We believe in the sanctity of human lives and view any infraction of same as worthy of questioning and due investigation by appropriate government authorities.

“It is on this basis that we hereby formally report the said incidence to your esteemed office and thereby request a proper investigation of same to enable all relevant authorities take further actions.” 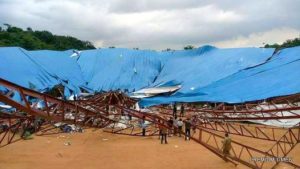