The Archbishop of the Enugu Province, p 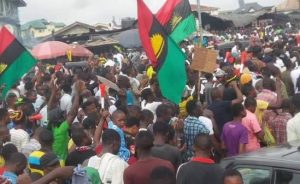 Anglican Communion, Emmanuel Chukwuma, said on Monday that the clergy is not in support of the sit-at-home declared by the Indigenous People of Biafra, IPOB, and Movement for the Actualisation of the Sovereign State of Biafra, MASSOB.

IPOB and MASSOB urged Igbos to sit at home on May 30 to observe the group’s anniversary.

Mr. Chukwuma, a most reverend, made this known at the Democracy Day celebration and second year anniversary of Governor Ifeanyi Ugwuanyi in Enugu on Monday.

The cleric, who spoke before offering the opening prayer of the Democracy Day, called on all people in South-East to go about their legitimate businesses, saying that the clergy were against the declaration.

“Before I offer the opening prayer, let me first of all state the position of the clergy on the sit-at- home declaration by IPOB and MASSOB.

“We are not in support of the call. We advise all to ignore it and go about their legitimate businesses,” he said.

Mr. Chukwuma, whose clarification was applauded by the crowd, urged traders and workers to open their shops and ignore the call.

He said the people of south-east would fare well and enjoy more and better dividends of democracy in a united Nigeria.