Rape is now seen as a normal thing as this assault now happens in broad daylight. This was the story of an eyewitness who  shared this terrible experience on social media 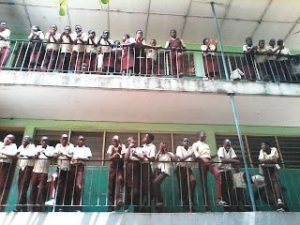 how final year secondary school students sexually assaulted their female counterparts on their last day in school at Falomo, Ikoyi, Lagos, in what has been described as a “tradition”, the Lagos State Government is said to be hunting for the students responsible.

It was learnt on Thursday that four of the students of Ireti Grammar School, Falomo, Lagos, have been arrested after the Lagos State Government tasked the police with tracking the perpetrators down.

According to the story shared by Michale Matthew, female students of Falomo Senior High School, who had just finished their final exam were targeted by male students of Ireti Grammar School, South West Ikoyi, who had also taken their last paper on Wednesday.

Matthew gave a graphic account of how some of the students pinned down their struggling victims, as their colleagues herded around, cheering the assailants.

The eyewitness, who apparently works in the neighbourhood, was closing for work that day when she chanced on the scene.

She said, “Their shouting overpowers any other sound and looking closely, I see the most unreal thing. It is actually a boy trying to force himself on a girl with his trousers partly down and the boys are cheering him on.

“People are looking and some persons, the security guards in the office near us are recording it. I open my car in disbelief and shout at the boys to break it up while shouting at my security and the second driver to assist me.

“I walk towards them and as I make my way towards them, I see another group and this time they have cornered one of the girls who fell while running from them.

“I see her kicked down, she bravely pushes herself up and another guy tries to clear her legs and she lunges at him and then a guy takes a pair of scissors in his hands and with one swoop tears her skirt from the bottom and also a part of the black spandex shorts she has on underneath.

“All this happens really in a few minutes and he proceeds to push himself into her through her back. His trousers is open too and another one tries to do same from the front. As this is going on, the crowd of boys are wild with frenzy, cheering the two boys on, while grabbing at her hair, breasts and she is fighting for dear life.

“This is not before I get the names of the boys as George and Abiodun as the main perpetrators, they are final year students of Ireti Grammar School SW Ikoyi.”

She said after intervening and forcing some of the boys to flee, she personally escorted some of the girls who clung to him for safety to the motor parks to board vehicles to their various homes.

On Thursday, policemen from the Adeniji Adele Police Division, the Social Welfare Department of the Lagos State Ministry of Youths, Sports and Social Development and officials from the deputy governor’s office stormed the schools to trace some of the boys who could be identified as the perpetrators.

Some of the boys were later apprehended. The police are said to still be on the trail of other schoolboys who took part in the attacks.

On Friday, the state Deputy Governor, Dr.Idiat Adebule, who oversees the state’s education ministry, confirmed the arrest in a statement.

“Four of the boys involved are already helping the law enforcement agents in apprehending others who participated in the reckless act,” she said.

The statement signed by the Assistant Director, Public Affairs,

Ministry of Education, Adesegun Ogundeji, indicated that the deputy governor had assured the public that extensive investigation will be conducted and all those found culpable would face the consequences of their indiscipline and lawlessness.

Adebule said, “Students are expected to be of best behaviour and shun all acts of violence and immorality that can undermine the policy of Government on discipline being entrenched in schools.

“The state government won’t take kindly to the reckless attitudes of a few that intends to drag the image built over the years in the mud.

“She stressed that discipline must prevail for the smooth running of the schools and acts of recklessness such as reported in the case under investigation is totally unacceptable and would not be tolerated.”

The deputy governor called on parents and guardians to monitor their children’s actions in and out of their school premises.

The state government said principals and heads of schools would not be held responsible for instituting measures to curb indiscipline in their various schools, warning that “anyone caught looking the other way will equally face appropriate disciplinary actions as stipulated in the Public Service Rule.”

The Coordinator of the Lagos State Domestic and Sexual Violence Response Team, Mrs. Titilola Vivour-Adeniyi, told Saturday PUNCH that her agency had visited the schools as part of its investigation.

She said, the public should expect prosecution in the case.

“We are working to ensure that we provide a holistic response to the case. Aside from investigation, there is also the legal aspect; possible prosecution to ensure deterrence.

“The Attorney-General has also given directives that the matter should be investigated. We are working to ensure that this kind of activity does not repeat itself again.”

She said in the coming weeks, DSVRT would embark on sensitisation and awareness in Lagos schools to enlighten schoolchildren, teachers and parents on sexual and gender-based violence.

But the Lagos State Police Command said there were no indications that the schoolboy’s actions could be termed as sexual violence.

Spokesperson for the command, Mr. Olarinde Famous-Cole, told our correspondent that reports from the police division in the area so far show that the case may not be rape.

He said, “As it is, there is no indication of rape. The report the division gave us is that students had rivalry and differences. The division called in some of the students to the station and would also be contacting their parents as part of the investigation. As I speak with you, the DPO said there is nothing like rape.

“When we have evidence through the reports of the state government, parents and the victims, we would be able to shed more light on the nature of what took place that day.”

But there are indications that this practice may not be new in some Lagos schools.

A resident of the neighbourhood, Mrs. Bisola Aderiye, told our correspondent that usually, when students of public secondary schools in the area finish their final exam, tearing their school uniforms while male students assault the female have always been the usual thing.

Asked why residents such as herself failed to do anything whenever they witness such things, she said, “Some of those boys move around with knives and scissors. Because some of them live around here, they always do it where we people cannot catch them. But we are aware they do it.”

Outrage by residents of the state continue to pour in as more people indicate that the “tradition” is actually not new.

A resident said, “It is a so-called normal activity for the leavers. They tear their uniforms (while) girls are raped and abused. In fact, count yourself lucky if raped by just a boy who protects you from being gang raped.

“Some girls absent themselves from school. Some wear three or four cyclers as protective wears; some bribe or pay for their freedom.”