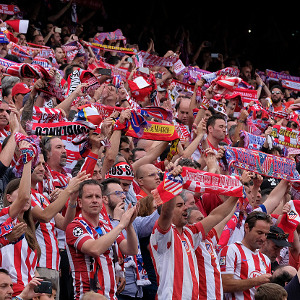 Current players Fernando Torres, Gabi and Koke represented Atletico alongside past greats such as Diego Forlan.

The game had a far larger attendance than the King’s Cup final between Barcelona and Alaves the previous night and allowed fans to say a last goodbye to their club’s home of 51 years before it is demolished.

The 10-times La Liga champions are leaving their ground named after a former club president in the south of the city at the start of next season for the 68 000-capacity Wanda Metropolitano stadium in the remote San Blas neighbourhood in the north-east of the capital.

The new stadium was planned back in 2004 in a bid to close the gap in revenue between Atletico and Spain’s biggest clubs Real Madrid and Barcelona and to give Atletico a more modern arena than the ramshackle Calderon.

Fans had long complained about the stadium’s poor transport links and a lack of parking space, although the decrepit state of the Calderon was part of its charm and a key aspect of the team’s identity as the underdogs in the city they share with global behemoths Real Madrid.

A banner before the Champions League semifinal second leg against Real last month perfectly illustrated Atletico’s image of themselves, proclaiming: “Proud not to be like you”.

Atletico trailed 3-0 from the first leg yet supporters still created a deafening noise as their team beat Real 2-1 on the night, bowing out of Europe 4-2 on aggregate but with their heads held high.

There are fears that Atletico will struggle to recreate the Calderon’s unique atmosphere in their new stadium, as West Ham United have found with their move from Upton Park to the less intimate London Stadium, where supporters are distanced from the pitch.

Coach Diego Simeone, however, has dismissed those fears.

“The emotions will move with us, the same people that are here will be at the Metropolitano,” he said. “Our passion and hope are not negotiable.”