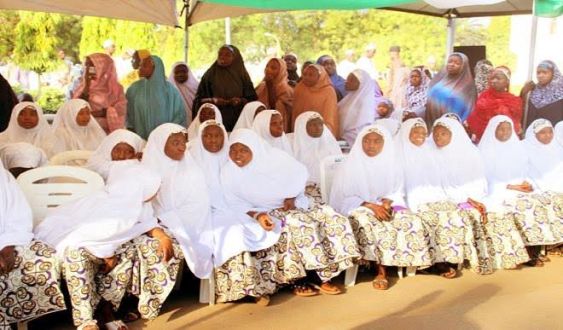 A businessman in Yobe state, identified as Mohammed Yakubu Jacob, has married off 50 young girls to their prospective suitors in Yobe state. The marriage ceremony took place in Gashua town in the state yesterday, May 21st, 2017.

According to reports, Jacob organized the wedding for the girls who are too poor to organize a wedding themselves. Most of the girls were children of Internally Displaced Parents.

This isn’t the first time Jacob would be organizing a wedding in this manner. Sometime in April, he organized a wedding for 40 girls with poor suitors.

On why he organized the recent wedding,the businessman said he got inundated by calls from the girls after they found out about the previous weddings he organized for other people.

“These girls will call me crying for help that their parents have no means to marry them off. I know how it feels for a father to have a grown up daughter that is due for marriage but he does not have money to do that. Some of the girls even lost their parents and I don’t want their dream to remain unfulfilled,” he said