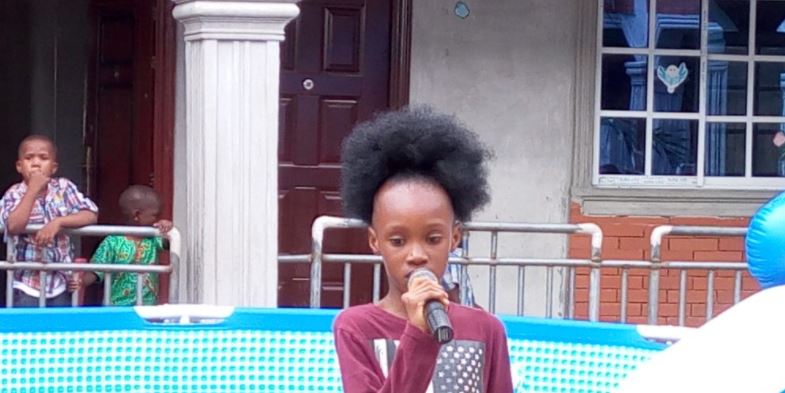 A seven-year-old female musical artiste, Iveose Ifoma, popularly known as Little Wonder, has described music sensation duo of Davido and Tiwa Savage as her musical idols saying she would love to sing with them in the nearest future.

Little Wonder, who came into the limelight at the age of two for playing a keyboard without the aid of an instructor, stated this on Saturday during the launch of her debut musical album held at the Daniels Model Academy, Orhuwhorun, Udu Council Area of Delta State.

She said she decided to launch the five-track album titled “Education is the best legacy” on Saturday to commemorate this year’s world Children’s Day celebration.

The primary four pupils who spoke with newsmen at the ceremony said she wanted a world where all children are happy and devoid of any form of molestation or attacks from guardians.

Little Wonder said the songs on the album were inspired by the things she sees around her and it took her two years to record the entire tracks contained in the album.

“I was born with the talent for singing. I started playing keyboard at the age of two years plus. I have always loved to sing. The album we are launching today contains five tracks. We have; My hands and Legs praising God; Rooney my friend; Abo-me (my hands); Hello Daddy and, My new heaven”, she stated.

She noted that all songs in the album were written by her, adding that she was greatly influenced by iconic music artistes such as Davido, Tiwa Savage, and Emma Nyra among others.

The teenage singer asked parents and guardians to help their children and wards discover their talents so as to make them quickly develop their potentials in life.

Iveose, who hailed from Isoko in Delta State said, “It took me two years to produce this album. After this launch, I will like to release another one album which I am already working soon. I will love to be a broadcaster and a singer in the future. I love Davido, Tiwa Savage, and Emma Nyra. They inspire me and I will love to work with them soon.”