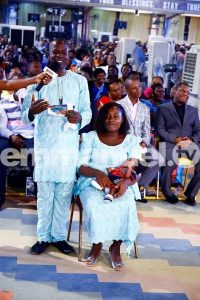 A man identified as Folajimi Dasho was diagnosed with low sperm count, which led to him trying unsuccessfully to have a child with his wife of 10 years. According to him, his situation caused his first wife to abandon him before he met and married his second wife.
He had been advised to go for adoption or stay childless but he refused to accept that as his lot. This led him to the Synagogue Church of All Nations (SCOAN) through his mother-in-law’s directions. On getting to SCOAN, he was given the ‘morning water’ and prayed for by Prophet TB Joshua. His wife took in soon afterwards.
According to Dasho, he also placed the anointed ‘morning sticker’ on his wife when she was due to welcome her baby, and also gave her the water, causing her to deliver safely. The couple showed their gratitude while proudly showing off their little daughter.
Source: ( Gossip.naij.com)