Following the outbreak of Ebola Virus in DR Congo, the World Health Organization (WHO) has deployed an investigation team to the country. 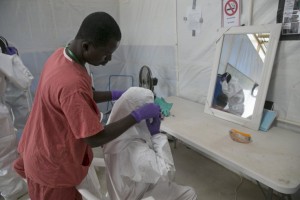 WHO Executive Director for Emergencies, Peter Salama, in a statement on Friday, said at least one person had died of the virus.

“An investigation team led by the Ministry of Health and supported by WHO and partners has deployed and is expected to reach the affected area in the coming days.

“An Ebola outbreak in north-eastern Democratic Republic of the Congo has killed at least one person,” Mr. Salama said.

According to WHO, the DRC health minister requested the UN health agency’s support after one of five blood specimens tested positive for the Ebola virus.

“On May 9, WHO was informed of a cluster of undiagnosed illness and deaths, including haemorrhagic symptoms in Likati Health Zone, Bas Uele Province, some 1,300 kilometres (about 800 miles) from the Congolese capital, Kinshasa, and bordering the Central African Republic.

“Since April 22, nine suspected cases, including three deaths, have been reported; six cases are currently hospitalized.

“The Likati health district is in a remote area, but contact tracing is essential to contain the epidemic in its focus; the DRC can rely on very experienced health workers for this purpose,” WHO’s DRC Representative, Yokouidé Allarangar, said.

“Matshidiso Moeti, WHO Regional Director for Africa, would arrive in Kinshasa this weekend to attend a coordination meeting of the national committee at the Ministry of Health to deal with this emergency and ensure that WHO provides all necessary assistance to the DRC.

“The WHO has also drawn up a comprehensive logistics plan to meet urgent requirements.

“The first teams of epidemiologists, biologists and experts in the areas of social mobilization, risk communication and community engagement.

“And also personnel specializing in water, hygiene and sanitation, are scheduled to reach the affected area today (Friday) or tomorrow (Saturday) via Kisangani,” WHO said.