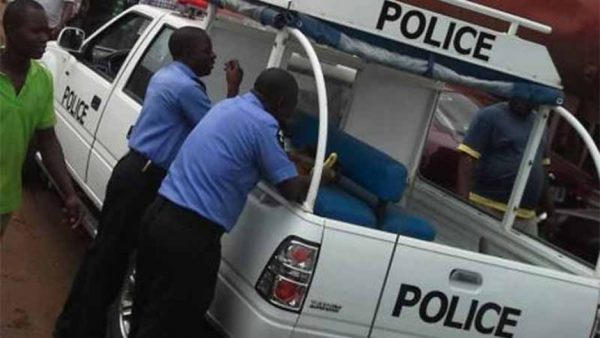 Mrs. Stella Achalla, a principal staff of the Federal Neuropshychiatric Hospital, Enugu is presently cooling off in police custody over alleged job scam.
According to Daily Post, Mrs. Stella Achalla, the secretary to the Medical Director of the Hospital, is currently being detained at the Enugu Area Command, alongside her alleged accomplice, one Mrs. Stella Egotanwa.
She was whisked away from the hospital premises by 4 pm. on Wednesday by plain cloth policemen.
Daily Post reports that the arrest followed a petition from one of the victims, Mrs. Agbanyim Roseline.
In the petition dated 20th April, 2017 and addressed to the Area Commander, Area Command Headquarters, Enugu, which was obtained by DAILY POST, the victims claimed that “one Mrs. Stella Achalla, a staff of Federal Neuropsychiatric Hospital, Enugu, fraudulently duped me and collected the total sum of three hundred and seventy thousand naira (370,000.00) from me on three different occasions for the purpose of securing job for my cousin, Mr. Agbanyim Uchenna in their hospital.
“Sometime in November 2015, Mrs. Achalla Stella contacted me though a friend, Mrs. Loveth Mbah and demanded initially the sum of two hundred and fifty thousand naira, (N250,000) for the job, but dramatically twisted and demanded extra one hundred thousand naira (100,000) claiming that Uchenna is a graduate and that those paying N250,000 for employment are NCE holders and below.
“I complied and she promised that appointment will come out in the early month of 2016, but we waited patiently for over a year and nothing happened.”
She further stated in the petition that by December 2016, “she came up with another trick and demanded another fifty thousand naira, (N50,000) meant for preparing the appointment letter which she claimed will come out by January or February 2017 and for reasons beyond my control, I was only able to give her twenty thousand naira (N20,000.)
“By February this year, she managed to pick my calls only once and ever since refused to pick my telephone calls.”
A reliable police source hinted that based on the petition, one Mrs. Stella Egotonwa, who allegedly works as an agent for Achalla, was arrested, adding that “she implicated the MD’s secretary.”
“She told operatives that she is doing the job racketeering on behalf of the CMD’s secretary, Mrs. Achalla. She confessed that all the money she had collected from people, including that of the petitioner, was remitted to Achalla.
“She actually confessed that she had collected such money from several persons numbering about 50 on behalf of Mrs. Achalla.
“She told operatives that Mrs. Achalla first collected N300,000 from her with a promise of giving her job, but never did. Instead, she sent her out to go and scout for other persons.
“Consequently, we invited Achalla to our office but she refused to come. We had no option but to effect her arrest. As we speak, she is in our custody, alongside her partner in the alleged crime, Mrs. Egotanwa”, the police source said.
Meanwhile, Achalla who was reached by our correspondent before her arrest, refused to respond to the text message sent to her mobile phone, just as she did not pick her calls.
But another investigation made by our correspondent on her activities at the Hospital showed that many workers were jubilant over her arrest.
The workers, who described the Isuochi, Abia State born staff as “the Maradona of psychia”, said she blocks them from having access to the MD.
“If she sees that you are close to the MD, she will fabricate stories against you so that the MD will see you as an enemy and keep you at arm’s length.
“She just finished building a glass house in the village and gives scholarships at random in the village and in the church to make people see her as a wonderful person.
“She supplies all the hospital equipment- electronics fridges, computers, laptops, photocopying machines and stationaries.
“She totally took over everybody else’s job to the point that she buys tona and stationery for library, instead of the HOD library buying them.
“As I speak, she employed over 30 of her family members in the hospital; that’s the kind of thing we have suffered in her hand”, he claimed.
He added that “So, the police should do their job and make sure that if found guilty, she should be brought to book.”
When contacted, the Police Public Relations Officer, PPRO, Mr. Ebere Amaraizu, SP, confirmed the arrest.
“Yes, she is being quizzed right now to establish her level of involvement in the alleged scam”, Amaraizu stated.