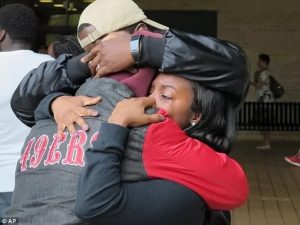 It was meant to be a day of celebration for the family of Richard Collins as he was to celebrate his graduation but it was a sad day for his family members as the 23-year-old student from Bowie State University (BSU) who was just about to graduate was recently killed in an alleged hate crime,he  was allegedly attacked during visit to University of Maryland. He was stabbed and died while in hospital.
This came just three days to his graduation. “I am yet to come to terms with the real motive behind my son’s murder. I feel pain and immense sense of loss. I am currently in no position to get emotions beyond just being sad,” his father, Richard Collins Jr, told reporters.
On the graduation day, the grieving and emotional father received degree on behalf of his late son, who was a business major and US Army lieutenant. The crowd could be heard cheering him up as he accepted the degree.
The institution also felt a sense of deep loss and honoured the late by holding a moment of silence in his remembrance. One of the professors from University of Maryland held a signboard with Richard’s name inscribed on it in special honour of the diseased.
Investigation into the Richard’s shocking murder is on. So far a 22-year-old suspect, who goes by the name Sean Christopher Urbanski, has been arrested and charged with murder. According to the documents presented in court, Urbanski, a white student, attacked the late with knife after the two briefly argued.
The suspected killer was arrested shortly after his cruel act and as he fled the scene of crime. FIB is reportedly looking into his case.
Source: ( gossip.naij.com)