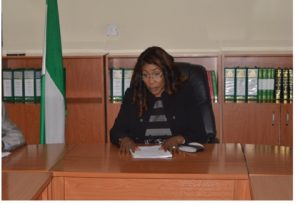 The Director-General of National Agency for the prohibition of Trafficking in Persons (NAPTIP), Mrs Julie Okah-Donli, has called for the arrest and prosecution of foreign-based human trafficking rings and mafia across the globe.

The director made the call when she received a delegation from the Spanish embassy led by Mr Raphael Mouib in Abuja.

She explained that the activities of such foreign based traffickers had constituted major threat to the global anti-human trafficking efforts.

The NAPTIP Boss specifically tasked members of the European Union and other international organisations to provide useful intelligence on the operations base and location of the human trafficking “lords” for the purpose of bursting their rings for prosecution.

The director-general told the visiting envoys that blowing the lead off the European-based human trafficking barons who have continuously mounted pressure on their home-based pimps for massive recruitment of victims would be a major boost to the current onslaught on human traffickers.

According to her, “the arrest and prosecution of those human traffickers that are based in any of the European countries is very crucial to our latest efforts to end human trafficking in Nigeria.

“We are imploring you to join hands with the Government of Nigeria and precisely NAPTIP in the area of intelligence sharing aimed at exposing those foreign based human trafficking madams who are believed to be behind the exploitation of our youths.

“We want them to be exposed and made to face the wrath of the law, this is one of the ways of ensuring success of the latest fight against human trafficking”.

Mouib had earlier said they visited NAPTIP to brief the management on the scope and the implementation strategy of the 11th European Development Fund project.

The leader of the delegation also said that they were at the agency to intimate it of the plans to commence the implementation of the 11th European Development Fund (EDF) project, which was designed to address some of the human trafficking issues in the country.

According to him, the main objective of the project was to reduce Trafficking In Persons (TIP) and smuggling of migrants (SOM) at national and regional level, and between Nigeria and the European Union (EU) continues with specific emphasis on women and children.

He disclosed that there would be various components of the project which would be managed by the International and Iberoamericana Foundation for Administration of Public Policies (FIIAPP) include capacity building for Officers of the Agency in the areas of investigation and prosecution as well as awareness creation.