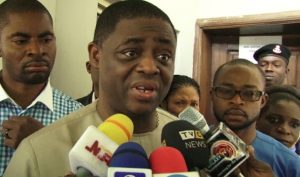 The police spokesman, Jimoh Moshood, told newsmen on  Friday night that the police have “absolutely nothing” to do with the raid that happened at the guest house of Mr. Ekweremadu.

No agency has claimed responsibility for the raid. Calls to EFCC spokesman, Wilson Uwujaren, were not answered Friday evening. The State Security Service does not have a contact person that interacts with the Nigerian public.

In an emailed statement, Mr. Fani-Kayode said the development marked the latest in a relentless persecution of opposition figures and other citizens by the Buhari administration.

The former Minister of Aviation said Nigerians should rise up and demand a stop to ongoing attacks against democracy and the Constitution by Mr. Buhari.

“As each day goes by more and more people have come to accept the fact that the Buhari administration is a government of fascists,” Mr. Fani-Kayode said. “They are led and guided by dark and sinister forces whose sole agenda is to divide our people and destroy our country.”

“You illegally and indefinitely lock up Sambo Dasuki, El Zak Zaky, Ifeanyi Uba and countless others and you criminalise them before the world.

“Worse still you refuse to bring them before the courts of law or to give their lawyers full and free access to them,” the former minister added.

Mr. Fani-Kayode said while Mr. Buhari’s “dictatorial” tendencies could be understood due to his military dictatorship background, it was unfortunate that Mr. Osinbajo would allow acts of impunity to manifest while he is in charge.

Mr. Osinbajo is the acting president with Mr. Buhari in London for medical treatment.

“He is an erudite lawyer and a gentleman of good stock and noble blood and he really should know better,” Mr. Fani-Kayode said of the acting president.

He said opposition elements like himself would not succumb to persecution, calling on Nigerians to legally push back against alleged tyrannical actions of government.

“This is shameful and shocking. Raiding the homes of our friends and leaders like Ekweremadu and harrasing their children will not deter, stop or silence those of us that are in the opposition. It will only harden our hearts and strengthen our resolve.

“It is about time that Nigerians woke up and stood up to their madness and tyranny.

“We must employ all lawful means to resist them and expose them for what they are. Not only are they incompetent but they are also sadistic and wicked.

“Nowhere in the world do citizens sit by idly and say nothing when their rights are being violated in this way,” he said.