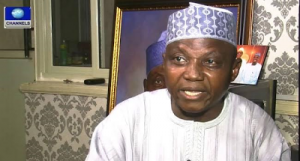 The Senior Special Assistant to President Buhari on Media and Publicity, Garba Shehu, h‎as blasted the  Ekiti state governor’s call for President Buhari’s resignation as an act of someone desperate for publicity. The Ekiti State Governor Ayodele Fayose spoke with newsmen in Lagos yesterday where he called on President Buhari to resign over his failing health.

Mr Shehu in a chat with Channels TV last night, Garba said he was disappointed to be called upon to react to Fayose’s statement. According to the presidential media aide, the presidency never responds to anything Fayose says.

“I’m sad that you are inviting me to speak on Governor Fayose. If you follow the Presidency, we don’t talk when he talks because he is desperate for publicity. We have a constitution that governs the country and the constitution is very clear about how the country runs. This country has a tripod of authority in terms of distribution of political power.
”You have the parliament which is doing its own work, you have the judiciary which is running, you have the executive and we don’t have any problem with this so therefore if anybody has a problem with the constitution then they should go and change it.”