The members of staff of the Ogun State Broadcasting Corporation have threatened to enbark on an indefinite strike from Tuesday, May 9, over the non-payment of their four months salaries by the management of the station.

The members, who addressed journalists on Friday under the aegis of the OGBC chapters of the Nigeria Union of Journalists and Radio Television and Theatre Arts Workers Union, at the NUJ secretariat, Abeokuta, said despite having given three different notices to the management, nothing was done on their plight.

Speaking through the RATTAWU Secretary, Biodun Adelodun, the workers said they had given the management notices of 21days, 14 days and seven days, adding that they would give another three days’ notice, which would lapse on Tuesday.

These notices, he said, were to serve as avenues for negotiations and amicable resolution of the issue, but there was no response from the management.
He said, “The situation that exists in OGBC is pathetic as our members are being owed four months salaries. Since we are already in May, it will soon be five months.

“We have given the management three different notices to allow for negotiations and amicable resolution of the issue, but nothing came out of it.

“The next notice we are giving the management will be for three days. We will give them the notice today (Friday) and it will lapse next week Tuesday. If nothing is done within this period, the workers will commence total strike.”

Apart from being owed salaries, Adelodun further claimed that workers’ were being owed non-remitted pension deductions from 2012 till date, totalling about N50m, while their non-remitted National Housing Fund was well over N2m.
Adelodun said the workers had no issues with the state governor, Senator Ibikunle Amosun, but the management of the station.

The unions dissociated themselves from politicians who had started politicising the issue of the non-payment of the salaries.

Adelodun, however, appealed to the governor to prevail on the OGBC management to pay their salary arrears.

Meanwhile, the state Ministry of Information and Strategy was said to have set up a committee to look into the issue.

It was gathered that the ministry had also made recommendations to the state government. 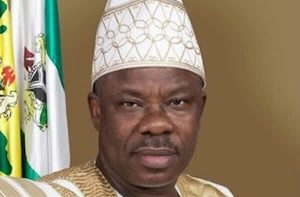