An alarm has been raised by the Movement for the Actualisation of the Sovereign State of Biafra, on Saturday, over the directive issued to policemen by the Inspector General of Police, Ibrahim Idris, on the sit-at-home protest planned by pro-Biafra activists to mark the Biafra Day on May 30.

MASSOB and another pro-Biafra group, the Indigenous People of Biafra, had ordered the closure of markets and restriction of movement, to honour Biafra war heroes and slain activists.

Idris had directed the commissioners of police to place their men on the alert to deal “decisively” with violent agitators.

MASSOB leader, Uchenna Madu, said the IG’s directive was uncalled for since the sit-at-home protest would be a peaceful exercise.

He alleged that the security agencies had perfected plans to unleash terror on MASSOB and IPOB members on May 30.

He said, “It is very bad for the Nigerian police to declare onslaught on the people on  May 30 peaceful programme. Are they planning to kill us even in our homes? Do we have any public functions like rally or processions? Our people should be very careful on that day.”

Meanwhile, the police in Ebonyi State on Saturday confirmed the arrest of some members of IPOB and MASSOB in various parts of the state for holding an unlawful sensitisation programme.

The police spokesman in the state, DSP Jude Madu, told the News Agency of Nigeria that the suspects were arrested for unlawfully sensitising the public to stay at home on May 30, in observance of the group’s anniversary.

“They would be charged to court and the command would ensure that they are duly prosecuted to serve as a deterrent to others.

Madu said, “IPOB and MASSOB are illegal groups and did not get permission from the police to embark on such an exercise which threatens the peace and security of the state.” 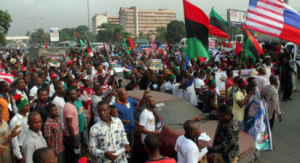