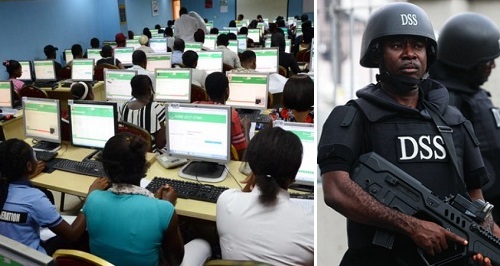 The Joint Admissions Matriculation Board (JAMB) says more than 10,000 candidates caught for examination malpractices in the ongoing UTME in Anambra have been handed over to appropriate authority.

Lynda Nwachukwu, the Coordinator of the board in Anambra, disclosed this to the News Agency of Nigeria (NAN) in Awka on Saturday.

NAN reports that the all computer-based testing (CBT) mode 2017 UTME, which started on May 13 in 642 centres nationwide, ended on May 20.
Ms. Nwachukwu said the examination, which took place in 28 centres in the state, was successful.

“There was no disruption of the exercise in any of the examination centres,’’ she said.

The coordinator said the candidates adhered strictly to the requirements of the examination, adding that JAMB provided all the materials required for the examination.

NAN correspondent, who monitored the last batch of the examination, reports that some parents complained of system failure in some CBT centres in the state.

Eucharia Okonkwo, a parent, said her daughter, who wrote the examination at the St Mary’s High School Ifite-Dunu centre, could not complete the examination due to the faulty computer and network failure at the centre.

According to her daughter, many candidates could not complete the questions in record time because of the faulty system.

Ms. Okonkwo advised JAMB to plan well for examination in subsequent years to avoid the technical hitches that could give the candidates psychological trauma.

Mose Mojekeh, Head, Department of Marketing at the Chukwuemeka Odumegwu Ojukwu University, told NAN on telephone that such system failure in UTME was not acceptable.

According to him, the hiccups could potentially deny young people from Anambra State university admission.

Mr. Mojekeh advised JAMB to urgently collate the number of candidates affected and set another examination for them.

He also decried the practice whereby JAMB sends officials from one state to supervise examinations in another state.

“Experience has shown that such officials do not care much about the candidates when problems arise, as they leave them to their fate,’’ the lecturer said.

He called on the management of schools, whose candidates experienced the computer failure, to take their complaints to the State Ministry of Education to present their cases.