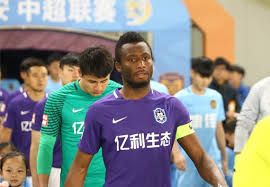 Super Eagles Captain,John Obi Mikel is set to return to training with his Chinese side in a week’s time after the Nigerian underwent surgery last week.

The player will return to training with his Chinese Super League side Tianjin Teda, according to an official statement released by the club.

“In mid-March this year, the team went to Shanghai training for preparation activities before Mikel got injured, the club and the team attaches great importance to thoroughly check the cause of injury,” read a translation of the statement.

”The first time (April 24), the club decided to send Mikel to Britain for diagnosis and treatment.

“On the 26th, the doctor diagnosed an inguinal hernia and adductor muscle injury, and two operations were successfully completed on 29 April, and he is expected to resume training after one week.”

This is good news for the technical director of the team, Gernot Rohr, who will hope to call up the player for the Super Eagles’ upcoming 2019 Africa Cup of Nations qualifier against South Africa.